A new campaign – commissioned by the Safer and Stronger Communities Partnership and led by local charities – has launched to raise awareness and support for local organisations that help those who are rough sleeping and begging across the Bradford District.

Known as #BradfordCares, the initiative makes it straightforward and convenient to give money, items and time to local charities through a new website – www.streetsupport.net/Bradford

The website acts as an online hub where people can find information about all the services available in Bradford, adverts for volunteers and items needed, as well as locally relevant articles that inform people of issues surrounding homelessness in Bradford.

For anyone wishing to find out more and discuss issues surrounding homelessness in Bradford, an information stall promoting the campaign and engaging people with what local organisations are doing to help will be at Bradford Interchange (7.30am – 10.30am) and Bradford Broadway (3pm – 6pm) on Thursday 21 December.

Visit streetsupport.net/bradford to find out how you can help people who rough sleep and beg.

Feedback your ideas to help improve the initiative for future campaigns; www.surveymonkey.co.uk/r/ZRBWWXL

Could you benefit from attending an informative event where you can receive free First Aid Awareness Training? Why not come to the Community Family Fun Day at the Carlisle Business Centre, Carlisle Road, BD8 8BD, on Saturday 2 December from 11am to 2.30pm.

Yorkshire Ambulance Service and NEESIE are running this partnership event, and the Ambulance Service, with their Recruitment and Apprenticeship Team, will be delivering the free First Aid Awareness Training to all. 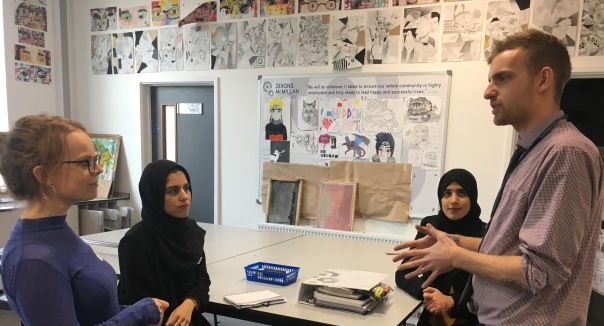 The Bradford for Teaching campaign is the latest step being taken in Bradford to boost teacher recruitment and retention.

A new website has been created, www.bradfordteaching.org  which allows people to find out more about the opportunities to train and work in Bradford’s schools.

Ten inspirational teachers and school leaders from the district have been chosen to be Bradford for Teaching Ambassadors. They will share their stories on social media about the impact their work is having  in order to help promote Bradford to teachers outside the district.

The new campaign follows on from the success of the Bradford bus tours which the council has organised to bring teacher training students into the district’ schools to see their work for themselves.

The Bradford for Teaching ambassadors have been chosen from schools across the district to champion Bradford and the rewards of teaching here.

One of those ambassadors is Luke Sparkes, the executive principal of Dixons Trinity Academy.

He said: “Bradford is an exceptional community: diverse, ambitious and culturally rich; it is a city which deserves teachers who are truly values driven and want to make a difference.  There is a strong current of educational innovation in Bradford with two secondary schools placing in the top 30 nationally for progress in summer 2017.

Ambassador Aamir Hassan, an assistant faculty leader and English teacher at Beckfoot School in Bingley said: “Teaching in Bradford is rewarding, extraordinary and what I live to do. I am inspired everyday by the students and we all learn from one another. Working with young people is an enriching experience and I wouldn’t want that experience anywhere else- Bradford is truly the place to be for teaching.”

“We are determined to provide the best possible education for all our young people. We know that the quality of our teachers is vital in turning this ambition into a reality. Bradford is a vibrant and diverse district.

“Our schools offer a variety of different opportunities and challenges, with the chance to work in different settings from urban and inner city schools to those serving rural communities. But we are all united by a shared commitment to ensure our young people achieve their potential. I hope the Bradford for Teaching campaign will inspire more teachers to join us on this journey.”

The campaign will involve a partnership of schools across the Bradford district. It is being funded by Bradford Council and co-ordinated by the Northern Lights Teaching School Alliance.

Bradford already leads the way in innovative work to recruit and retain the best teachers.

Bradford Council committed to investing £660,000 on teacher recruitment over a three year period. Since then the authority has run the highly successful bus tours taking teacher training students into Bradford schools to see the work they do for themselves.

It has also set up a Talent Bank which is used by school leaders to fill their vacancies with the best suited candidates. This has helped to recruit around 200 new teachers to Bradford schools over the past two years.

Now partners in Bradford are keen to build on this success with a campaign which celebrates and promotes the district more widely as a place where teachers at any stage of their career can make a difference.

Bradford has received a funding boost to improve literacy standards across the district. Below is a press release from the National Literacy Trust which works with the Council to raise standards.

“A literacy campaign from the National Literacy Trust and Bradford City Council has received a new £197,000 funding grant from the Morrisons Foundation, a charity set up by the supermarket, to boost literacy levels in Bradford.

The funding will be used to deliver literacy activity in Bradford for a year. Launched as the Bradford Literacy Campaign, the initiative has been active in the city since 2012.

Over the past five years, 30 local partners have supported literacy in Bradford and the National Literacy Trust has worked with over 200 schools in the area. Key successes include the Our Stories poetry project, which was launched to engage pupils with low literacy, especially boys. Over the course of the programme, the percentage of Year 6 pupils reaching the expected level in writing increased from 46% to 92%, while their self-esteem and confidence also increased significantly.

Neonatal work has also been a key success for the campaign. Working with Bradford Teaching Hospitals NHS Foundation Trust, neonatal charity Bliss and Boots Opticians, the campaign gave out 500 story packs to parents of premature babies. The packs included books for parents to read to their babies and tips and information on how communication can help development.

As it moves into a new phase, the campaign will be rebranded as Bradford Stories. The new name celebrates the rich heritage of Bradford and highlights the importance of families, young people and different communities in the city sharing stories with one another.

Over the next year, the Bradford Stories campaign will focus on addressing literacy issues facing families in Bradford, including engaging dads and male carers in their children’s learning and getting families reading with their children every day. The campaign will also highlight the benefits of bilingualism, and launch new initiatives targeting local schools and volunteers from the local community.

To celebrate the new funding and campaign name, Bradford Stories is calling on all Bradford residents to snap a photo of their favourite place to share stories in the city, and post the picture on social media using the hashtag #BradfordStories. The best pictures will win prizes including book tokens.

Imran Hafeez, Manager of the Bradford Stories campaign, said: “We’re absolutely delighted to have been awarded this funding from the Morrisons Foundation to continue our work to raise literacy levels in Bradford. Since launching the campaign, we’ve delivered lots of inspiring projects and achieved great results, but there is still more to be done to ensure every child in Bradford has the literacy skills they need to succeed. Our partnership work has been crucial to the success of the campaign to date – with this new funding we can expand this work further and reach more people across Bradford than ever!”

The Morrisons Foundation was set up by Morrisons supermarkets in 2015 and awards grants for charity projects which help to improve people’s lives. Since launching over £15 million has been donated to hundreds of charities across England, Scotland and Wales.

David Scott, Morrisons Foundation Trustee, said: “We are delighted to be supporting the National Literacy Trust’s work in Bradford as we know what an important difference this can make for families from across the city.”

To find out more about the Bradford Stories campaign, visit bradfordstories.org.uk.